A Reinterpretation of the Podium

The use of bamboo scaffolding for construction in Hong Kong lends itself to tradition. However, one should not be quick to say that old traditions are of no practical use in contemporary society. The nature of bamboo as a material, as well as its methods of use in scaffolding serves as a generator for a reinterpretation of the podium. By dissecting bamboo and analyzing each of its significant characteristics, we are able to create a hierarchy of strategies with which to approach this reinterpretation.

BAMBOO STRUCTURE
A piece of bamboo (called a culm) is composed of a series of cavities, which are divided by diaphragms. The diaphragms make themselves visible as nodes on the outside surface. The cavities are, of course, hollow, and this finds its way into the podium within the inserted structures that snake through it. The walls/edges are treated and layered, but in a more general sense, these structures all contain direct passageways from one side of the podium to the other. They are hollow in a sense, though they branch off and allow activity to slow down in many places. They are much like transport devices, serving to improve the permeability of the podium.

CRACKING AND SPLITTING CHARACTERISTICS
Bamboo has a tendency to CRACK and SPLIT – operative terms which find their way into the podium. The podium is split into 8 segments, and the inserted structures are located within/on/around/under each of these splits. The spaces within each inserted structure split in various locations to accommodate programmable spaces alongside transportation spaces.

BAMBOO AS A MODULAR BUILDING MATERIAL
In its current state, the podium is essentially a giant box. In order to bring a more human scale to the podium, it is broken up into segments, which find their influence from the modular nature of bamboo scaffolding. Segmenting the podium is essential if the inserted structures are to fit in properly at a somewhat rhythmic interval. Segmenting also leads to a variation in the ground plane and program of the roof level – which mixes public and private uses.

GREEN NYLON SHEETS AS A LAYER
The green nylon sheets that are draped over bamboo scaffolding serve as a protective layer, yet are translucent and, from a certain vantage point, offer a degree of transparency. Thus they become a visual layer which allows one to see what is going on behind them to a certain extent. Bamboo scaffolding is also erected in two layers in most cases, with an inner layer called the finishing scaffolding, and an outer layer called the working scaffolding. Working platforms are laid between the layers. The inserted structures that snake through the podium comprise layered edges which strive to create the same effect. The edges become narrow, occupied spaces in many cases. From certain points, they are simply translucent, while at other points, they become transparent. They must offer privacy (in the case of the structures accessible exclusively by the residents), and at the same time – since they slice through a major public realm – they must allow for public viewing. This is achieved through the varying opacity of, and the depth between each layer of the edges.

TYPES OF BAMBOO – HIERARCHY / LAYERS
There are 2 types of bamboo used in scaffolding: Mao Jue, which is bigger in diameter and is used for major standard bracing; and Kao Jue, which is smaller in diameter and used for horizontal ledgers and transoms. This implies another idea of LAYERING in the scaffolding, which influences podium. This also sets up a HIERACHY within the scaffolding, which finds its way into the podium in both obvious and subtle ways. The inserted structures snake through the podium, and become secondary to the major public spaces on one hand; yet on the other hand, perhaps their presence as smaller structures within a larger structure makes them more prominent than the major public spaces of the podium.

TEMPORARY ACCCESS
Bamboo scaffolding is used for temporary access, though “temporary” may stretch up to two or three years in the case of new high rise construction. It has the advantages of being flexible and adaptable to almost any building form. It is used in confined spaces, on sloping ground, and cantilevers, among many other “terrains.” Since it requires only a few tools to erect, and is very lightweight, it is assembled very quickly, and disassembled even more quickly. It is a very versatile material, and the podium draws influence from these characteristics. The inserted structures, like scaffolding, find their place anywhere they need/want to be. In this case, they are located at the joining datum/plane of each of the podium’s segments. The most prominent influence is drawn from the versatility of bamboo. Work is done in tight alleyways with no problem. Signs are repaired or erected with relative ease as the bamboo is able to latch onto a building in a multitude of places, and cantilever out to support workers. Some of the “anchor points” for the scaffolding are actually quite astonishing - anything in sight can more or less be used to fasten bamboo to as a stability point or a major structural joint for the scaffolding. Though the inserted structures in the podium are, in and of themselves, permanent structures, they serve as a host to a variety of temporary and permanent activities alike. The most temporary activity housed within them is that of transportation. As “hollow” structures, they serve as hallways (in a certain sense) that one uses to move either from one extreme edge of the podium to another (or beyond, as they connect exterior activities on both sides of the podium), or between varying points within the podium. The structures provide space for temporary programs such as small markets/vendors as well. Keeping the program within the podium fresh will keep its residents content, as well as draw in more of the general public.

SCAFFOLDING AS A PARASITIC STRUCTURE
In a certain sense of the word, bamboo scaffolding is parasitic. One finds it climbing up walls, creeping around corners, snaking through alleys, and even building upon itself to reach a higher point. It is, for the most part, an exterior parasitic condition when used for repairing existing buildings or signs, or as an access method for cleaning windows etc… In some cases it can become an interior parasite during construction of a new building for instance, where it might bleed into the building in certain areas to allow workers to accomplish certain tasks. However, by definition (Merriam-Webster online) a parasite is:

In this case, the scaffolding depends on the building for support, and is contributing to it by allowing for repairs etc… So there is a symbiotic relationship between the two. By definition also (Merriam-Webster online), parasitism is:

An intimate association between organisms of two or more kinds; especially: one in which a parasite obtains benefits from a host which it usually injures

In this case, the scaffolding does not usually “injure” the building, or whatever else it might be latched onto. It might leave some minor “scars” where support brackets are fastened to walls, but that can hardly be considered “injury.” Hence it is for these reasons that the scaffolding becomes parasitic only in part.

In the case of the podium, the inserted structures find their influence from this idea of parasitism, but do not necessarily act as parasites, since they become permanent structures within the podium. The temporary market activities held within do not “injure” the podium, although they might benefit from the podium, which brings about thousands more customers.

BAMBOO AS INFLUENCE FOR A MICRO-SCALE CITY WITHIN PODIUM
The bamboo scaffolding can be seen as a container of sorts in many instances. For new buildings, the scaffolding is erected along with the building; constantly hiding what goes on inside. When the building is complete, the scaffolding is disassembled, and the building becomes visible for the first time to the general public. The scaffolding could be thought of as a sort of cocoon, within which the building grows and transforms before emerging as a finished product. The same might apply in repair or maintenance situations, where a broken down sign is enveloped in scaffolding, and emerges new once again.

The idea of the podium as a container or envelope can be thought of in a similar respect. The existing podium presents a relentless and monotonous idea of a commercial mall. The proposed podium breaks up this monotony by providing spaces within the inserted structures for temporary program. Markets can come into some spaces; theatrical productions can take place in others, and so on. The streets of the city are woven through the podium as they connect inhabitants to the mass transit systems, to the parks and recreational areas, to the retail spaces, and so on. The podium, then, becomes a container for all the different activities of the city, in essence becoming the city at a micro-scale; and offering all of these activities to the residents and public visitors who live in, or pass through the podium.

A TEXTUAL STRATEGY TO APPROACHING THE PODIUM

PODIUM CITY_HK
Aesthetic image – create fluctuating edges to increase aesthetics of the exterior podium
Breathe – the structures will puncture the podium and allow inhabitants to move through more freely from the exterior / create more direct routes on the interior
Capsule – the structures will act as shells into which temporary program will be inserted
Container - capsule
Duplicity – merging of the public and private realms as they both make use of the structures in different ways
Elevate – elevate the plane on which inhabitants cross the streets
Enclosure – bringing public aspects and activities of the city into a series of enclosed spaces / creating a micro-city within the podium
Ephemeral – lasting only a short time / temporary program within the podium
Exhale – akin to breathe / creating a more breathable space/series of spaces which facilitate connections to the context
Evacuation – temporary program withdraws from the structures when its period of service has concluded
Gesture – to express the idea of connecting to the more high-speed city edge, and the slower park edge
Hollow – structures maintain a hollow characteristic to facilitate movement through the podium
Isolated – some structures become isolated for resident use only
Light – as noun and adjective; puncture the exterior to draw light deep inside the podium / structures influenced from lightweight bamboo scaffolding, become flexible and versatile
Membrane – the wrapped segments of the podium are stitched together with the structures to create an almost rippled membrane
Plastic – treat existing podium as a plastic object that can be molded to more adequately relate to its context
Pliable – structures become conceptually pliable in their programs to accommodate both the public and the private
Run – creating a more permeable condition will allow a more rapid movement of space through the podium
Surface – energetic edges within the structures to echo the Hong Kong alleys / create an interactive surface along podium edges, revive the human scale
Symbiosis – relationship between the podium and the structures within / idea of parasite
Void – crucial to improved permeability / move away from stacked planes
Wander – create opportunity for inhabitants to move freely into/out of/around/across/etc… 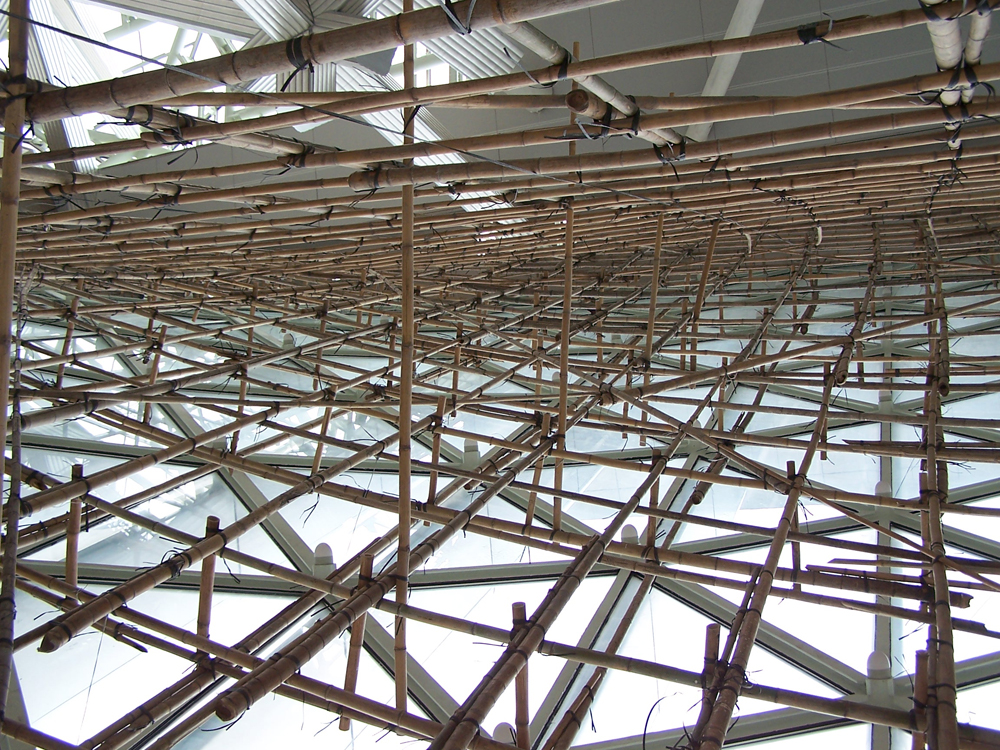